Ed came down last week with a new game from Mantic called Dead Zone. He had picked it up the week before and assembled all the models etc so we were ready to go. The game is set in the same universe as Mantics 40K clone "Warpath" but the rules and scale are completely different. We have played warpath with about 70-80 figures on a 6' X 4' board, from the Deadzone boxset we played about 12 figures a side on a 2' square board. The Warpath rules are very similar to Kings of War, their fantasy counterpart, but for Deadzone the rules are unique. Each player has about 10-12 figures per side, and the initiative passes from player to player after activativing one figure, so you carry out the actions for a single model, then the opponent activates a single model etc so both players are continualy envolved. In addition, a lot of the tests are based on oppossed die rolls, so you are active even doing your opponents action. 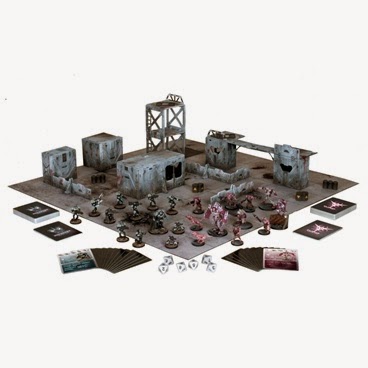 There are two factions in the box, a high tech human force with cool armour and a variety of weapons, and the Plague force who are basically sci fi zombies. Some of them are ex human soldiers, still carrying guns which is unusuall for Zeds, some are hulking monsters from earlier waves of infection. The humans would not look out of place in a lot of scifi settings, the plague would be usable in horror or sci, and would suit a resident evil style game very well, they even have a pair of zombie attack dogs in the starter force. 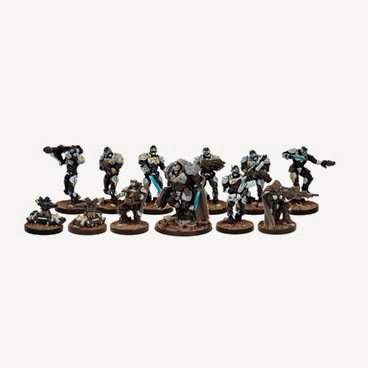 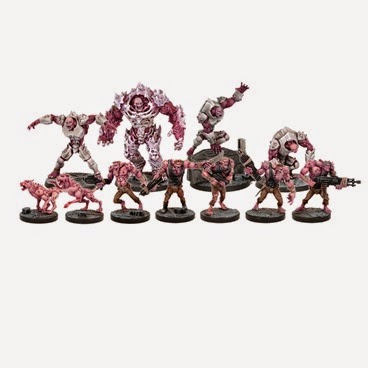 The box contains a set of cool modular buildings with raised walkways connecting them and a variety of debris to scatter on the board as cover. The board itself is a good quality mat, two foot square, divived into 3 inch squares in an 8x8 pattern. All movement and ranges are measured in these squares  and there is a limit of how many figures can occupy any given square at one time.

There is a deck of cards per faction, which contains stat cards for each figure, mission cards to give each player their in game objectives, and cards which give temporary bonuses to you, or causes problems for you opponent.

The rules are D8 based. To perform an action, you roll a given number of dice against the appropiate stat and count the successes. Cards can increase the number of dice you roll. Your opponent rolls against their own appropiat stat, you then compare the numer of successes you have each scored. Uusually a draw favours the defender, if the attacker scores more it will be a minor success, doubling or tripling the defenders number of successes will get a more severe result.

There are various other factions, including Marauders (Orks), Forgefathers ( Dwarves), Asterians ( Eldar) and rebels who are a mix of various humans and aliens. There are also support options for each race and some races have walkers as well. Each force can have one mercenary which are unique characters with their own stats.

All in all, we really enjoyed the game, and were impressed by the quality of everything in the boxed and liked the completeness of it. Rather than a weak force as a starter, you get a good strong force for each side. I am looking forward to the next game ( I will try the plague forces next time) and will pick up my own copy of the boxed set next time I am in the game shop. I might have to get the Marauder starter set while I am at it.....
Posted by Kreoseus at 11:27